“On Christmas Eve, many years ago, I lay quietly in my bed.  I did not rustle the sheets  I breathed slowly and silently.  I was listening for a sound-a sound a friend had told me I’d never hear-ringing bells of Santa’s sleigh.”

If You Were Asked to Board a Train to the North Pole on Christmas Eve, Would You Do It?

I Saved You a Ticket.

This is The Polar Express!

“Where?  Why to the North Pole of course.”

“This is the Polar Express.”

“The train was filled with other children, all in their pajamas and nightgowns.”

The Golden Ticket to Ride.

“We drank hot cocoa as thick as melted chocolate bars.”

“Lights appeared in the distance.  They looked like the lights of a strange ocean liner sailing on a frozen sea.”

“Who receives the first gift? we all asked.  He will choose one of you.”

I knew that I could have any gift I could imagine.  But the thing I wanted most for Christmas was not inside Santa’s giant bag.  What I wanted more than anything was one silver bell from Santa’s sleigh.”

“When the train reached my house, I sadly left the other children.  I stood at my doorway and waved good-bye.  The conductor yelled something from the moving train but I couldn’t hear him.”

“He cupped his hands around his mouth.  MERRY CHRISTMAS!” 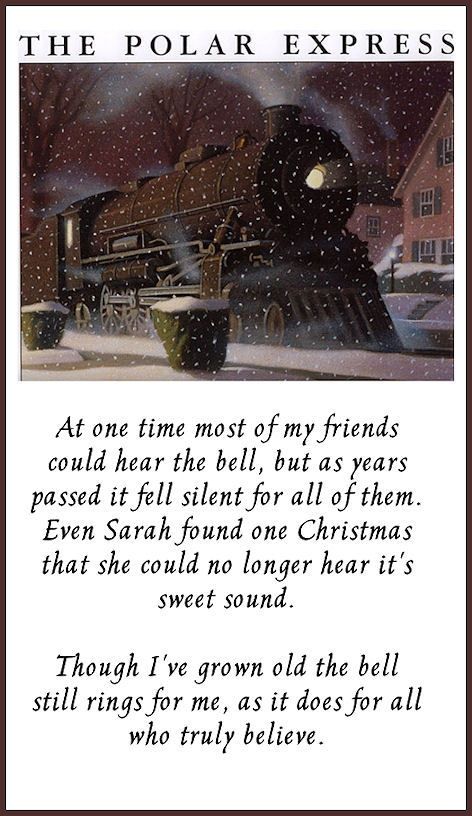 The Magic ER Tree…A True Story
Next Post: Sparkle Skirt in a Flash!