Our High Schooler is Back in School.  This is an Impact Year for Her Future Goals.

Our Mid-Schooler has One More Week.  Still Time to Find Lunch Time Adventures with Mom.

And So Little Miss and I Ventured Out at Lunch.

Downtown.  In the Ghastly Heat.

To See What We Could See.

We Didn’t Have to Go Far.  Just Wander Across the Street.

On a European tour, A.B. McMillian, the Occidental president, was delighted with the Doge Palace in Venice and suggested his architect, Henry Trost of El Paso, use the Venetian Gothic Style of the Doge Palace as an inspiration and model.

The Doge Palace in Venice.

The Doge Look-Alike Palace in Albuquerque.  All We’re Missing is the Water.  🙂

Traveling Further On Down the Street.

So Does this Meter.

And the Lonely Bike Stand.  No One Rides Bikes in This Heat.

On to the Lunch Spot along an Abbey Road Sidewalk.

Soap Operas from the Song Dynasty. 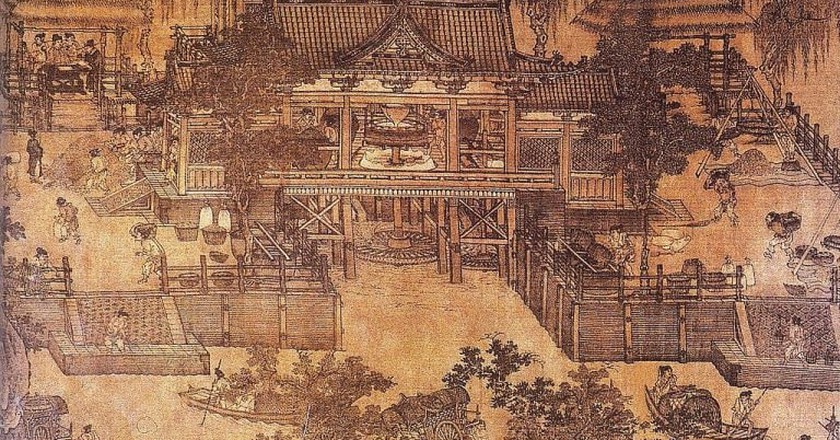 Played Over and Over on a DVD.

And As We Ordered…Who Should Appear but Miss Doodle and a Friend for Lunch.

Her High School is on the Next Corner.

With Good Grades and Behavior, Students Can Venture Out for Lunch.

Miss Doodle brought in Her Packed-From-Home Lunch.  Tossed to the Side.

We Pushed Tables Together and Enjoyed Lunch with a Rousing Discussion of the Song Dynasty.

Hot Soup on an Even Hotter Day.

By the end of the Song dynasty, Chinese society was the most advanced in the world.

The population had exploded, doubling in size during the 10th and 11th centuries.

Gunpowder had been discovered, fireworks popularized, and true north located.

Movable type printing had allowed for a great proliferation of literature and contributed to an increased literacy rate.

The government had built a navy, traded heavily with foreign powers, and established a civil service exam that allowed commoners to rise to leadership positions.

And Now Back to Work and School.

With a Wave to the Tourists on the Trolley.

Flying Past All the Architectural Wonders of Downtown.

The Similar Architecture of Venice, Italy and Albuquerque.

How to Tell Time with a Sun Dial and Locate True North.

The Wonders of the Song Dynasty and Its Impact on the China of Today.

And Lunch with Mom and Sister and a Friend is So Much More Delightful than Tired Old Spaghetti in a Tupperware Tub.

In Fact, It is Quite Magical.

Finally. Thankfully. Air Travel Done Right!
Next Post: Once Upon a Time in Brooklinen. A Mystery Solved.